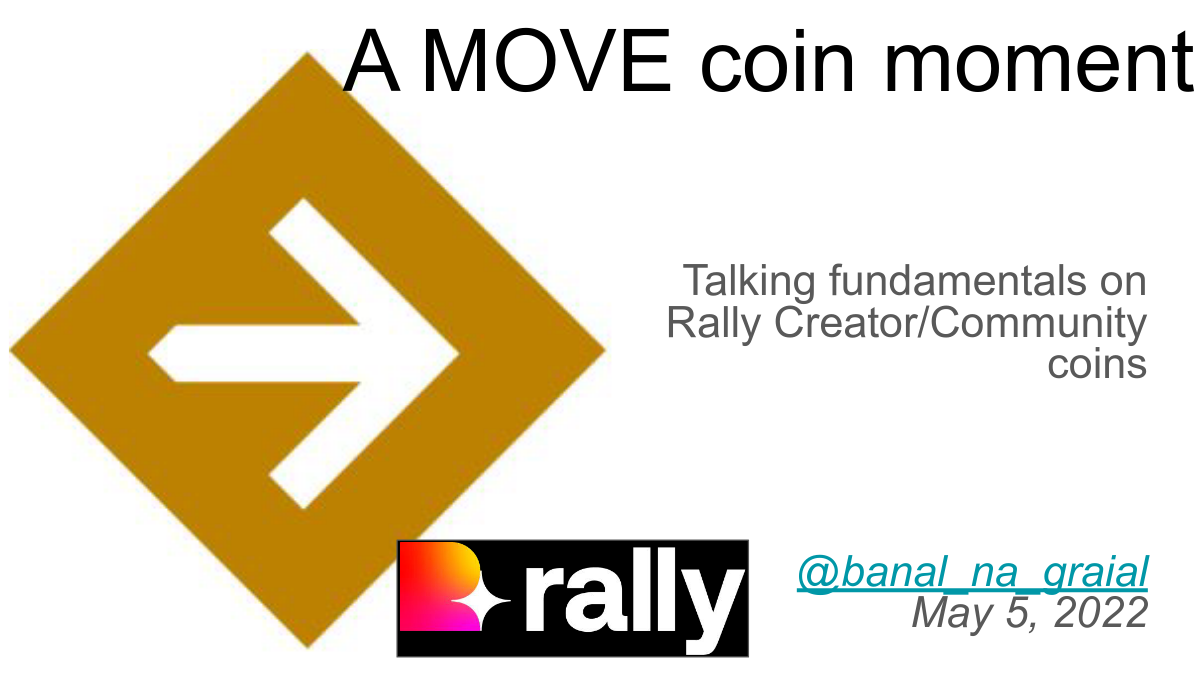 a.The contents of this article were updated on Nov 28 to incorporate some commentary regarding the SEC Complaint and FTX collapse

b. the report is unaltered from its original posting on May 22

Dissecting a market failure in a Rally creator coin

I was a hesitant, late-entrant into the crypto/Web3 space primarily because of the energy intensity of Proof-of-Work.

At the time of writing this report, Ethereum had not yet completed its full transition over to proof of stake. As a devops guy, I can only imagine the kinds of challenges they faced in that migration.

In the meantime, I enjoyed getting cozy with a couple online communities in the web3 space to better understand the tech.

$MOVE is a (now-inactive) token hosted on the rally.io platform of the Rally network. As enthusiasts and new entrants into the space, we didn’t really know what to expect. The Creators behind $MOVE have built much of their business success as early adopters & guides through the maze of new technologies have emerged in the World Wide Web over the last couple decades.

If you are an entrepreneur looking to up your game in online communications & marketing. You can check them out at unemployable.com.

There are several entities/projects which are associated with the $RLY token. One such project, rally.io was billed as a web2 entry point into the world of crypto for the not-so technically inclined members of the Creator Economy (think bloggers, YouTubers, course-creators, podcasters…)

In July of 2021, Rally was one of 15 tokens that a rogue CoinBase engineer illegally profitted from by Front-Running their ICOs.

CoinBase voluntarily reported this to the SEC which resulted in the SEC issuing a complaint, describing why the Rally token (alongside 15 others) meets existing definitions of a security. The section specific to Rally starts on page 28.

To be clear, neither CoinBase nor the SEC made any claims that Rally or anybody within that ecosystem was involved in insider trading. The $MOVE community had mostly pulled out of the ecosystem by that point for reasons you could read about in my report and a couple other shenanigans that I won’t mention here.

The Crypto community has been very vocal about its desire to be regulated as commodities (rather than securities). This is mainly due to less reporting requirements.

The desire to be labelled a commodity has been a big factor contributing to projects proclaiming the ‘utility’ of the token. This claim will be reasonable in many cases.

Many/most projects in the web3 space are building some form of organization and seeking to provide income opportunities for their members. In this case, the token becomes a fundraising mechanism. This activity sits very firmly in existing securities laws that got established in the wake of the 1929 Black Thursday crash and subsequent Global Great Depression.

One of the main requirements of a security is ongoing disclosure and reporting. As an example, the Ontario Securities Commission outlines its Continuous Disclosure Requirements here

Show me the value

My experience is that one of the main goals/desire of people in the web3 space is to allow value to accrue into abstract concepts.This provides a very fertile space for invention and new possibility.

But the hype is usually built around the allure of ‘earning opportunities’ provided by a token, usually because we hope to sell it later at a higher price. This allows us to tell ourselves that we are buying into a project for altruistic or ‘community-minded’ reasons.

Benjamin Graham, the founder of the school of Value Investing once stated that:

"Investing is most intelligent when it is most businesslike"

Financial Reporting was not yet required in 1934, when he wrote his seminal book Security Analysis. In those markets, Insider Trading was just part of the game. We are also at that stage in the world of online community & tokenization.

It is rather clear to me that success in this space will need to centre around the same process of Value Creation that has always been necessary for commercial success.

Value creation is hard in the first place. Explaining how your new project & community intend to create and transmits that value (“utility, it’s often called”) to its members is usually the fun & exciting part.

Reporting on progress towards that objective is more tedious and less gratifying, but it is a very necessary part of the process.

Also, recent events should make it clear how getting involved with projects that neglect this crucial aspect can produce devastating outcomes…

When the fox finds the backdoor to the henhouse

Consider the case when value accrual occurs around an abstract concept like Trump Loses which you might recognize from the ‘balance sheet’ of the FTX fraud/corruption scandal.

A concept like Trump Loses is sure to attract a diverse range of support and resistance (socially and financially).

It is rather clear at this point that the primary losers of this situation are the people who were convinced to deposit money into this project, platform, exchange, however you might call it.

Regardless of where you stand on this particular statement, I suspect that you would want to know if your funds &/or sweat equity were being appropriated towards such an ‘asset’ within your holdings.

As the leading light of rule of law today, it will be very interesting to watch how the ruling party of the US government will handle these misappropriated funds now that it’s clear that their helmsman was among their major beneficiaries.

The world is watching.

Please forward this issue of Paglalayag to a friend who might also enjoy the journey.